We only entered George this time for the biggest show in Belgium the belgium winner!

He did fantastic under judge Dagmar Klein.

George get the honour to be BEST OF BREED!!

It was our last show for the year 2017! We can be very proud of all our wins during the year.

A huge thanks to all judges who where involved to that!

today with the black pack!

Proud to tell you that the first puppy's from George are born, they are bred by Jenny Starke from Germany. (kennel Vom Hause Starke.)

Super news from Mechelen, George won the CAC/CACIB and honour of BOS!

And now he can add a new title to his list,

He is a brand new:

On Saturday George took the CAC/CACIB and went BEST OF BREED!!! in the mainring he did the cut to the last 6 as the only poodle!!
Now he is brand new INTERNATIONAL CH!!

On Sunday George took again the CAC/CACIB and also the honour of BEST OF BREED!!
With the title BENELUX WINNER'17

George took again the BEST OF BREED with CAC/CACIB - Golden winner title and Crufts qualified for 2018 (2nd time this year).

Later in the mainring George got a very nice 3th BEST IN GROUP!!!!

Maaaany thanks to both judges!!

For the very first time out in france, and he did it!!

George- Marincole You Gotta Love Me was 1st. exl.
Best male with CAC/CACIB and later on he won the honour of  BEST OF BREED!!


in the mainring he was selected by the best 8 dogs, and was best poodle of the show!

Many thanks to the judges:

George did it again!! CAC/CACIB and BEST OF BREED at the international outdoor show in Echt, who was this year for the very first time a late night show.

We had today a new team member, a Medium Black poodle who is bred and owned by Marina Wiering.
Max "Pietro Allegro Souvenir" was for the first time out with Martin, and they showed there socks of!

1 Excl. with Junior CAC, Junior BOB and icing on the cake Max became BEST OF BREED!!! on an age of 12 months.

Also in the dwarfs we had a great day, George "Marincole You Gotta Love Me " was entered in Champion class, who he won!

Later on he won CAC/CACIB and BEST OF BREED!

Many thanks to judge: Mr. Muntean (RO)

George was entered in Champion class who he won with an excellent, later on he won Best male with CAC, BEST OF BREED and the title CLUBWINNER'17

Finaly George got the age for his adult champion, and he DID it!!!!
1 excl. champion class, CAC/CACIB!!!
After winning his 11th dutch CAC he is now iffical an new DUTCH CHAMPION!

Super proud on our black pearl!! <3

Many thanks to the judge C. Lebret from Bulgaria

OWYEAH!! what a day again for George!

He was the only one who we had entered for Wieze, George was entered for the first time in Championclas.

Later that day in the mainring George shows his socks of, he didnt put any foot wrong and shows his heart out with Sebastian. He came, he saw and he DIDIT AGAIN!!!! BEST IN GROUP #1!!

In BEST IN SHOW ring, George was showing like he did in the group ring, it was really eye candy to watch both of my loves together! George got a very nice 4th BIS place over an entry of more than 1150 dogs.

We entered for the very first time Sydney ( Swan Sensation After PArty) she was 1 VP and BOB Puppy!

In the mainring she won a BEST IN SHOW PUPPY #2 ALL BREED!!!

George (Marincole You Gotta Love Me) was entered in Open class, he won 1st Excellent, CAC/CACIB and BEST OF BREED!

In the mainring he shows his socks of and did it!!

What a day!! Many thank to all the judges of today who believed in our dogs! <3 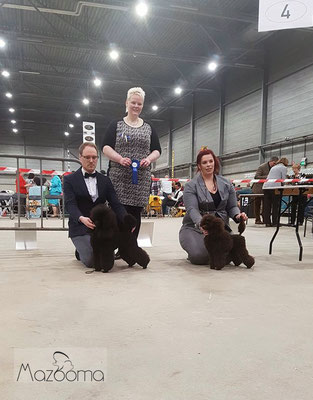 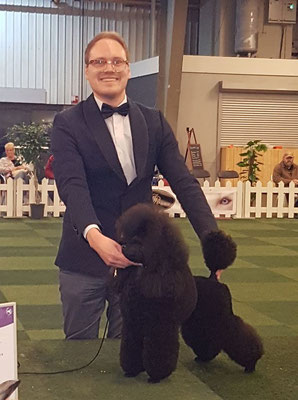 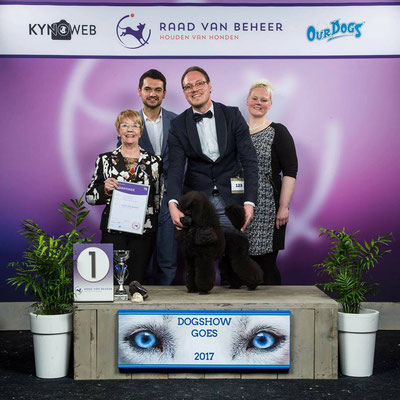 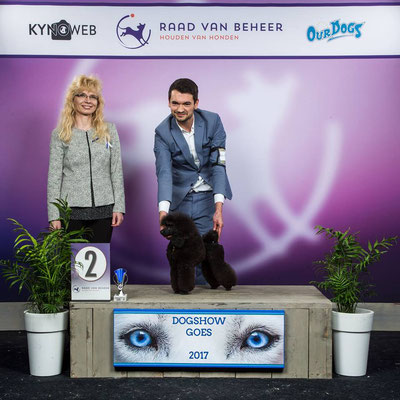 After only 1 week after Luxembourg shownwe where again on the showground.
We entered George in Open class where he got 1st Excellent, Later on he won the CAC/CACIB BEST OF BREED!

I will thank the judge Sally Burns from Ireland for all her lovely critiques about George!

We are soooo happy, George got his first adult country title by winning CACL and Res CACIB he is now  LUXEMBOURG CHAMPION!!!!

His res CACIB will be a full one, the beautifull black Male who was standing in front of George is a CIB CH. What means George got his 3rd country and all the point for CIB CH. (unfortunality still to young for the title).

Many thanks to breed specialist Jean Francois van Aken ( Supers Supers kennel BE).

George "Marincole You Gotta Love Me" had a great day at Weelde dogshow.
He got 1 Excl openclass, later on CAC/CACIB.

For best of breed it was a Brother and Sister battle.
George got the honour for BEST OF BREED.
His beautiful sister Isa is owner by the breeder Marion Postmus (NL)

In the mainring George was selected by the last 8 .


Many thanks to the judges from today:

Every second year there is the STG show, a very nice and sportif show for group 9.

George was entered in the open class who he won with excellent, later on he won de best male competition with CAC.
2 days before George his 2nd birthday he did it.. by taken the BEST OF BREED ribbon back home!

In the mainring he won a nice 4th place.

januari the 7th we went to Genk dogshow, the show we can walk to.. only 2 minutes of driving with the car.
Sebastian and George went to the show while Martin was at work.

In the evening it was time for Champion of Champions.. with the top 40 we where qualified to enter George..
If there was only space for 32 dogs in the knock out roundes.. the 3 judges gave every single dog point.. Maximum 100 each judge. They gave George 289/300 points!!!
He was selected for the knock out.. and went all to the top 8!! Many thanks to the 3 judges of the evening: